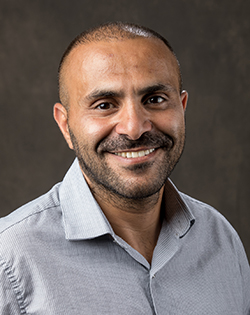 Born in Iraq, Ahmed Muhamed earned his B.A. in English Language and Literature from the University of Baghdad. He came to the United States as a Fulbright Language Teaching Assistant at the University of Arizona, where he served as an instructor of Iraqi Arabic and received his M.A. in Near Eastern Studies.

Ahmed has taught all levels of Arabic at many American universities and colleges, including the College of William and Mary and Cornell University. Certified as an Arabic Oral Proficiency Interview (OPI) tester by the American Council on the Teaching of Foreign Languages (ACTFL), he assessed students’ progress for the U.S. State Department’s Critical Language Scholarship Program (CLS). Over the course of his teaching career, he has attended workshops on language acquisition and teaching and developed numerous instructional materials that improve and promote students’ understanding of key grammatical concepts and facilitate their transition between Arabic language levels.

His M.A. thesis focused on the contemporary politics and history of Iraq through an examination of the religious and political role of Iraq’s foremost Shiite cleric, Ayatollah Ali al-Sistani in the post-Saddam era. He considered how al-Sistani draws upon two political roles, that of an activist and a pacifist cleric, and how the interplay between these theologically based traditions has shaped the political future of Iraq. Within this framework, his thesis demonstrated the pragmatic role that the Shiite religious establishment can play in society to safeguard and enhance their socioeconomic status in an era of multi-party systems and shifting cultural values.

Ahmed is interested in contemporary Arabic Literature, and he has published on the theme of political and social change in the Middle East. In addition, he has written extensive memoirs of his life experience in Iraq. He is passionate about teaching Arabic and communicating his knowledge of Iraqi and Middle Eastern culture to students. Engagement with Arab culture is central to my teaching philosophy. Consequently, I always seek to undergird the language teaching with a cultural understanding that provides helpful context for the language.

Language is meaningful and rewarding when students use it to achieve communicative goals. Speaking the target language in class and avoiding English immerses and remolds students to welcome a new language for use in their daily lives.